Chat with us, powered by LiveChat

Although cavitation can occur anywhere in a hydraulic system, it commonly occurs within the suction line of a pump. This will cause excessive noise in the pump – generally a high pitched “whining” sound. However, this excessive noise is only the tip of the iceberg! The real result of this phenomenon is severe pump damage and a decrease in pump life. I have personally seen many instances where a customer was replacing pumps frequently, thinking they were receiving defective pumps from their vendor. In reality, the pump failures were not due to poor pump quality – the failures were occurring because of cavitation. 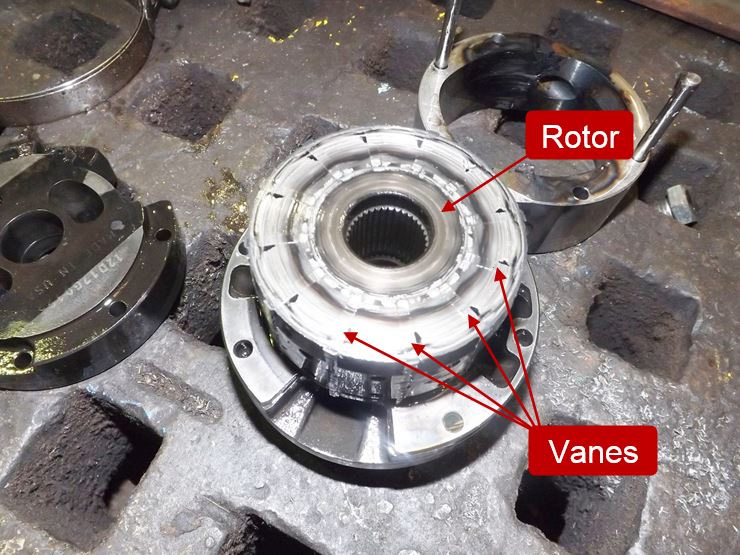 In my 35-plus years of troubleshooting hydraulic components, this is the worst case of cavitation damage I have ever seen. In addition to the usual erosion of the parts, the vanes were actually fused to the rotor slots! Although this is an extreme example, it shows the potential damage to a pump due to cavitation. The good news is that cavitation is preventable and we will look at several conditions that can trigger this phenomenon.

Many systems use a suction strainer to prevent large particles from entering the pump. These strainers are often located inside the reservoir, so they tend to go without service. However, if these strainers become contaminated, the vacuum at the pump suction will increase and cause cavitation of the pumps. This cavitation will lead to pump damage. A plugged suction strainer is the most common cause of pump cavitation. Some time ago, I received a call from a customer in Ontario, Canada regarding a pump that had been replaced several times. Each pump was very noisy, and they were perplexed as to why the noise remained even after they changed the pump. Of course, I immediately suspected cavitation, so I asked them to drain the tank and inspect the suction strainer. They found the suction strainer (pictured at right) had become contaminated and was causing cavitation of the pump. The strainer was cleaned and their problem was solved. Of course, inspection and servicing of the suction strainers is now a part of their regular preventative maintenance procedures! 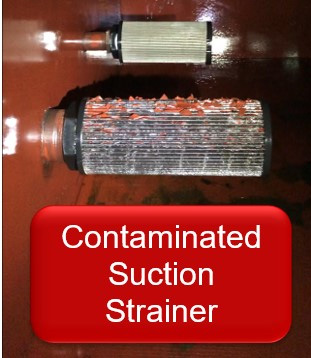 I was called to a plant recently to investigate the reason for frequent pump replacement on an injection molding machine. I was advised that these very expensive servo-controlled pumps had never lasted more than 18 months, and recently were only lasting a few days before failure. The reservoir had been drained and a high degree of metallic contamination was found inside. Of course, these contaminants were also found in the suction strainers. I checked the nominal flow rating of the strainer and it was rated by the manufacturer at 132 GPM. The sum total flow of the four pumps connected to this strainer was 200 GPM. This led to a deficit of 68 GPM at the pump suction ports which was causing cavitation whenever the pump volume exceeded the strainer flow capacity. As this cavitation damaged the rotating groups inside the pumps, metal particles were introduced to the reservoir through the pump case drain lines. These particles subsequently caused plugging of the suction strainer, which caused the metal particles to bypass the strainer through the bypass check valve and ultimately be re-introduced into the pump suction lines. This led to a vicious cycle of frequent pump failures.

A few months ago, I was performing reliability assessments at a sawmill in Idaho. I was advised of a specific issue with a fixed- displacement 30 GPM vane pump which had been replaced twice since the system was brought on line 18 months prior. The other pumps on the system were performing well, so the customer was naturally curious as to why this pump was failing so frequently. The recommended maximum fluid velocity for the suction line on a hydraulic pump is 5 ft./sec. When this system was installed, a 1” suction hose was installed. At 30 GPM, this resulted in a fluid velocity of 12.5 ft./sec. which was leading to cavitation and premature failure of the pump. This application needed a 1-3/4” hose to bring the velocity below the recommended 5 ft./sec.

Many people regard a breather only as an item to be removed when adding oil to a reservoir. A breather filter is one of the most important items for maintaining proper conditions inside a reservoir, but I find that it is one of the most neglected items on any hydraulic system. When oil is drawn from the reservoir by the pump and an equal amount of oil is not returned to the reservoir, the oil level will drop. Air needs to be introduced into the reservoir to occupy the extra volume created when the oil level drops. This prevents a vacuum from forming inside the reservoir, thereby preventing cavitation. A contaminated or improperly sized breather filter can cause a vacuum condition.

Although many factors can affect hydraulic pump life, cavitation is a major cause of premature failure. Understanding this phenomenon and taking steps to prevent it will pay big dividends in machine production and reliability. With proper care, a hydraulic pump should last many years.

OUR SERVICES . BRANDS WE REPAIR . ABOUT US . CONTACT US . EBAY STORE . BLOG
**Universal Servo Group LLC is not an authorized distributor or representative for all of the listed manufacturers. Universal Servo is not sanctioned or approved by all manufacturer or trade name listed.**